“Not many of us get to live to see our own legacy play out in such a meaningful, remarkable way. John Lewis did. And thanks to him, we now all have our marching orders — to keep believing in the possibility of remaking this country we love until it lives up to its full promise.” — Barack Obama

Rep. John Lewis’ great contributions to this country will never be forgotten. The son of Alabama sharecroppers, Lewis became involved in the Civil Rights movement at only 15-years-old and went on to serve 17 terms in Congress since first being elected in 1986.

He was one of the original Freedom Riders, the youngest keynote speaker from 1963's March on Washington, the leader of the “Bloody Sunday” march in Selma in 1965, and so much more.

Lewis was a symbol of what he liked to call “good trouble” and his enduring legacy of hope, faith, and righteousness will live on for generations.

Keep scrolling to see the late, great John Lewis through the years. 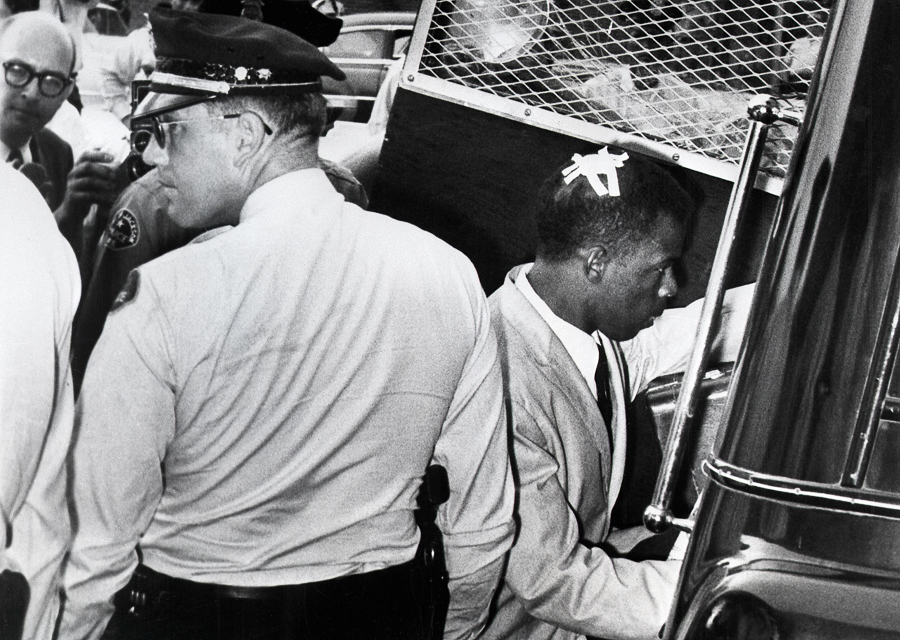 With the Adhesive tape "X" still on his head, marking the spot where he was struck in racial violence at Montgomery, Alabama, John Lewis, student leader of one of the groups of "Freedom Riders," enters a police van after his arrest in Jackson, Mississippi. Lewis and 26 other "Freedom Riders" were arrested on their arrival in a heavily guarded bus. 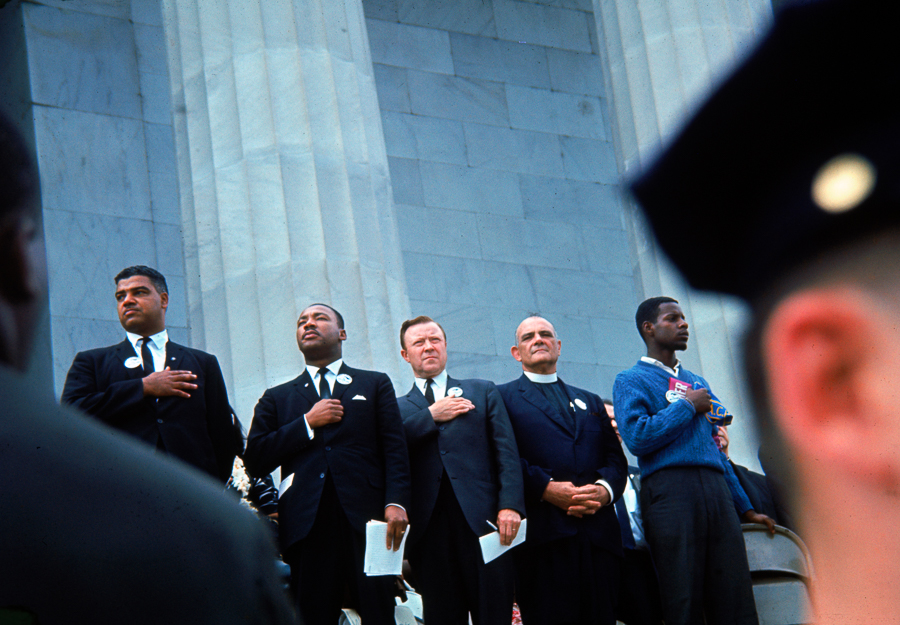 During the March on Washington, civil rights leaders (L-R) Whitney Young Jr., Martin Luther King Jr., Walter Reuther, Dr. Eugene Carson Blake, and John Lewis stand on the steps of the Lincoln Memorial and, except for Blake, hold their hands over their hearts, Washington DC, April 4, 1963. King delivered his landmark 'I Have a Dream' speech later in the day. 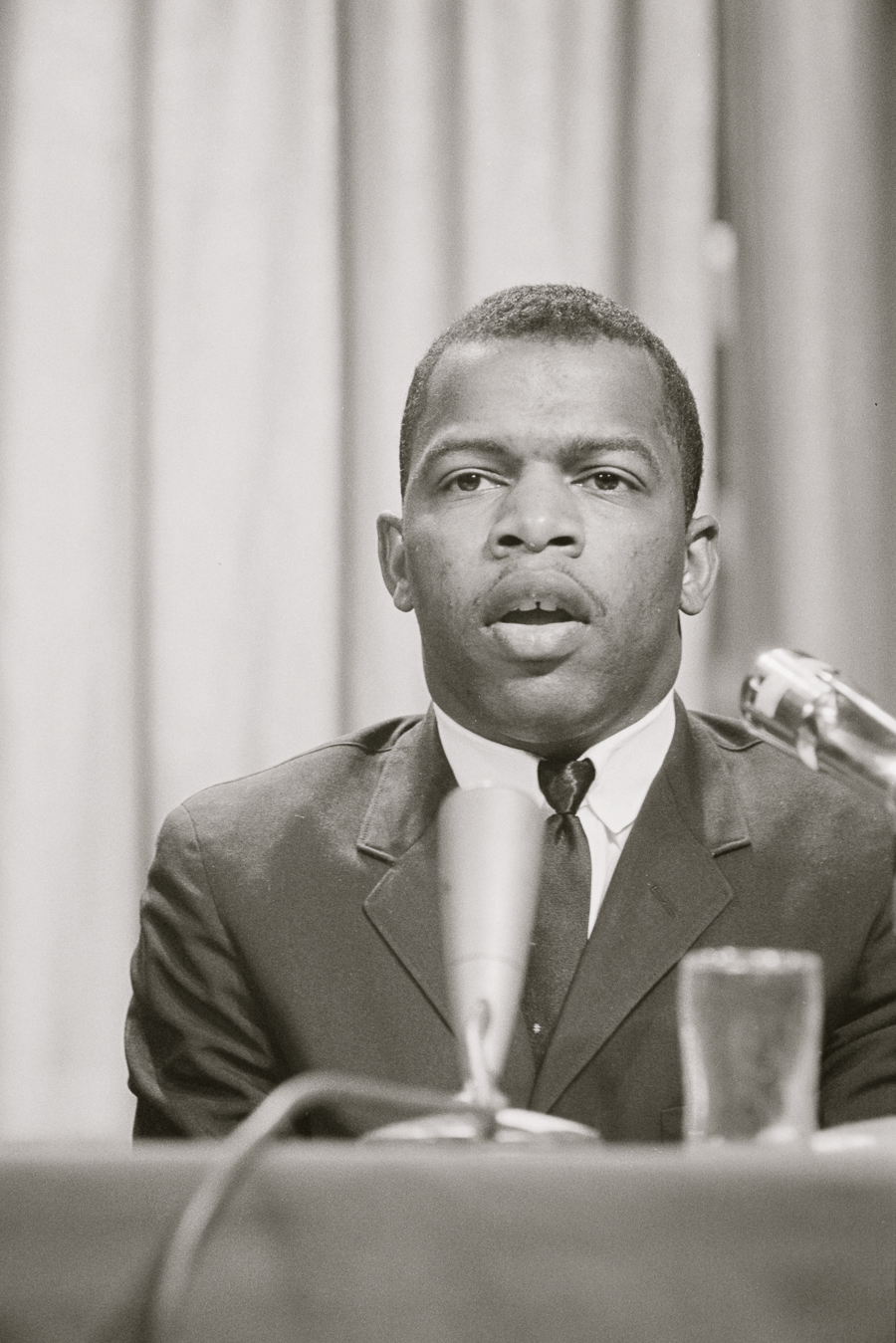 John Lewis attending a meeting for the American Society of Newspaper Editors. 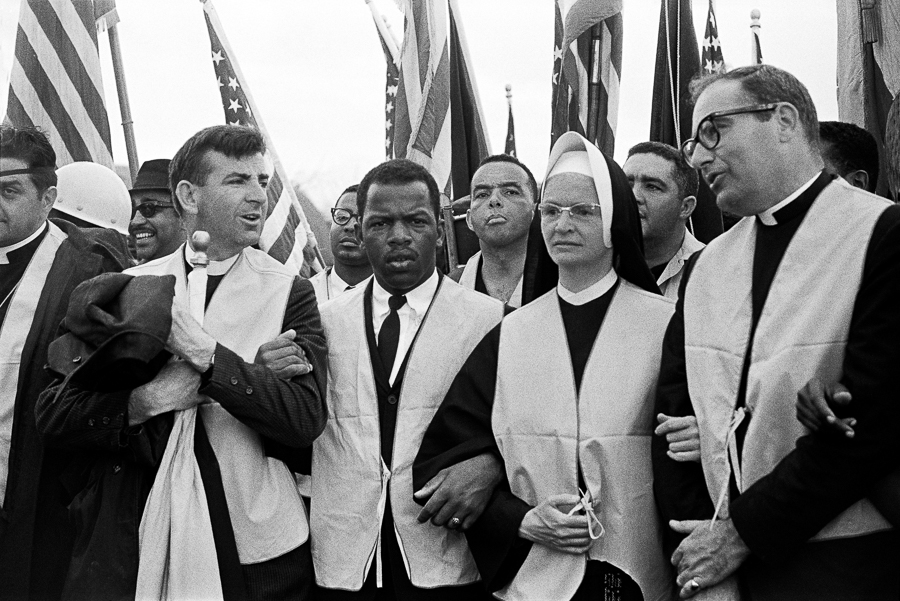 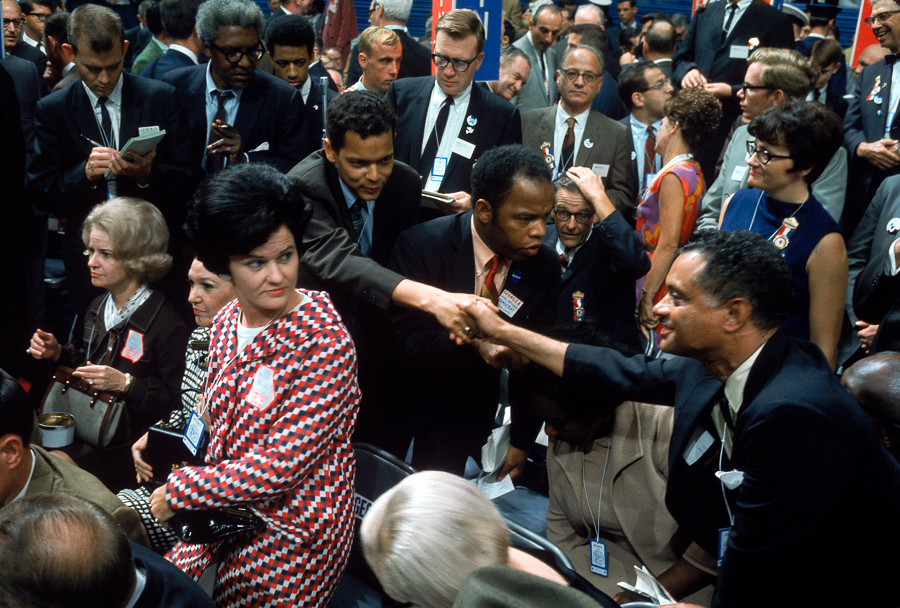 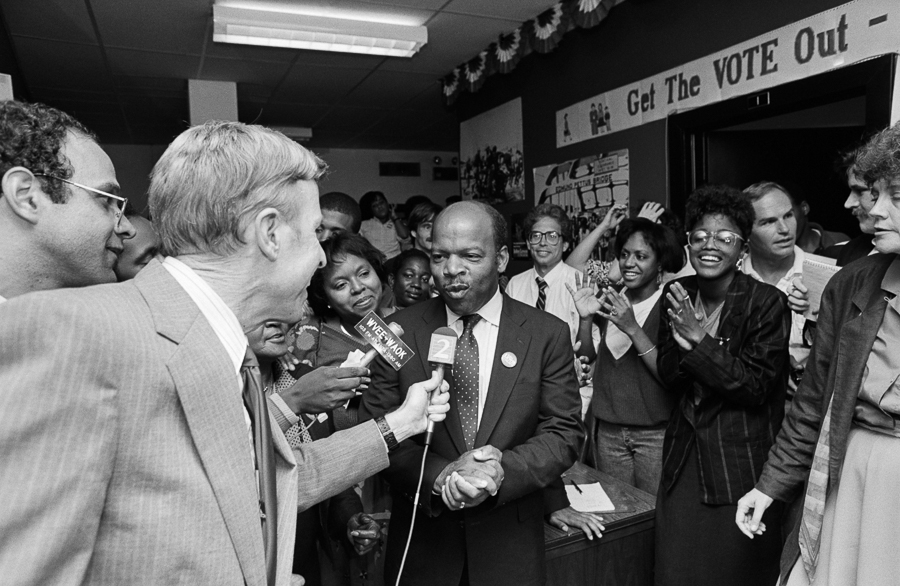 City Councilman John Lewis clasps his hands as he is surrounded by happy campaign supporters while he talks to the press after an unexpected victory over state Sen. Julian Bond in the Democratic runoff for the 5th Congressional District seat. Underdog Lewis trailed throughout the sometimes bitter primary against Bond, his longtime friend and civil rights ally. 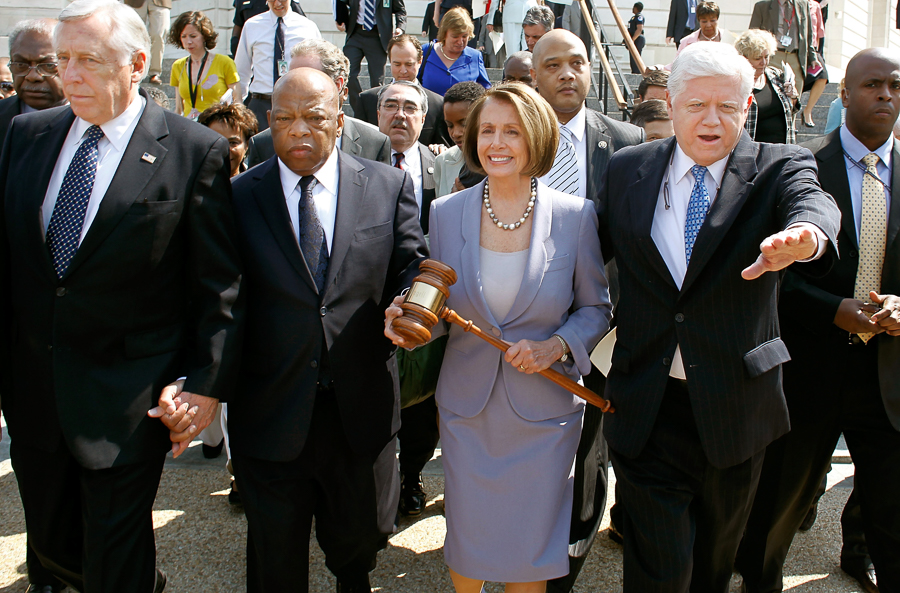 Speaker of the House Rep. Nancy Pelosi (D-CA) (C) carries the gavel that was used when Medicare was passed by the House in the 1960s while marching with (L-R) Majority Leader Rep. Steny Hoyer (D-MD), Rep. John Lewis (D-GA), Rep. John Larson (D-CT) and other members of the Democratic Caucus from the Cannon House Office Building to the U.S. Capitol for the health care reform vote March 21, 2010 in Washington, DC. 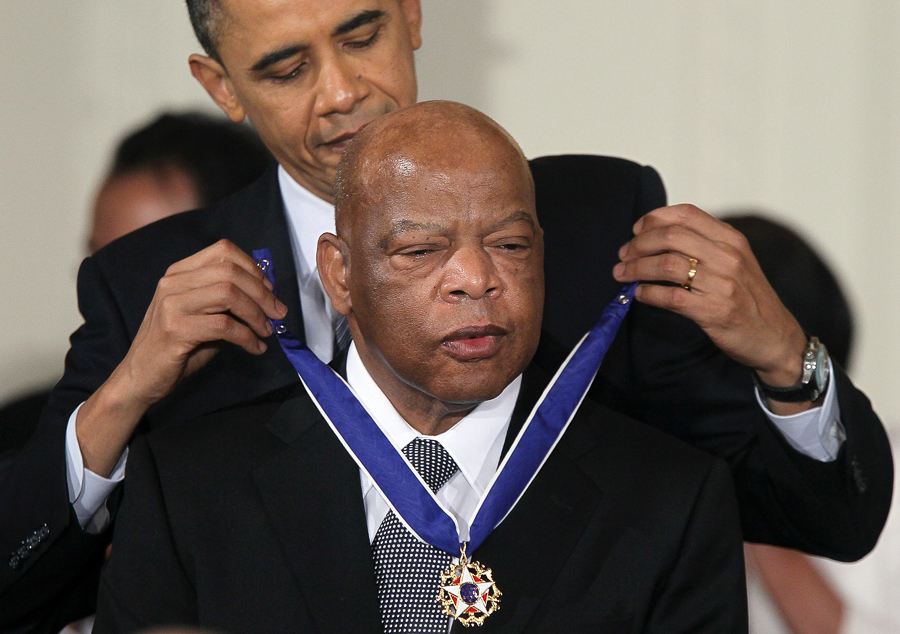 Rep. John Lewis (D-GA) (R) is presented with the 2010 Medal of Freedom by President Barack Obama during an East Room event at the White House February 15, 2011 in Washington, DC. Obama presented the medal, the highest honor awarded to civilians, to twelve pioneers in sports, labor, politics and arts. 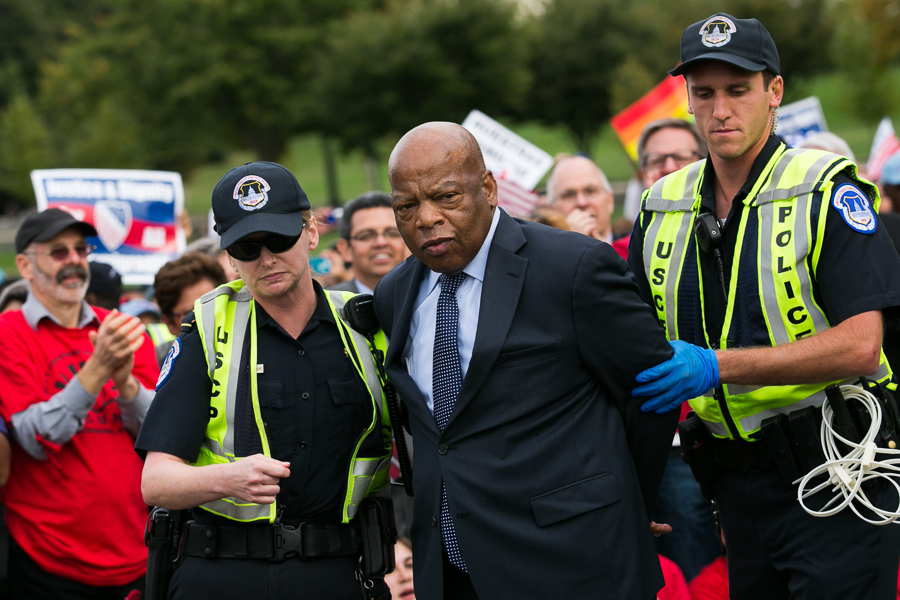 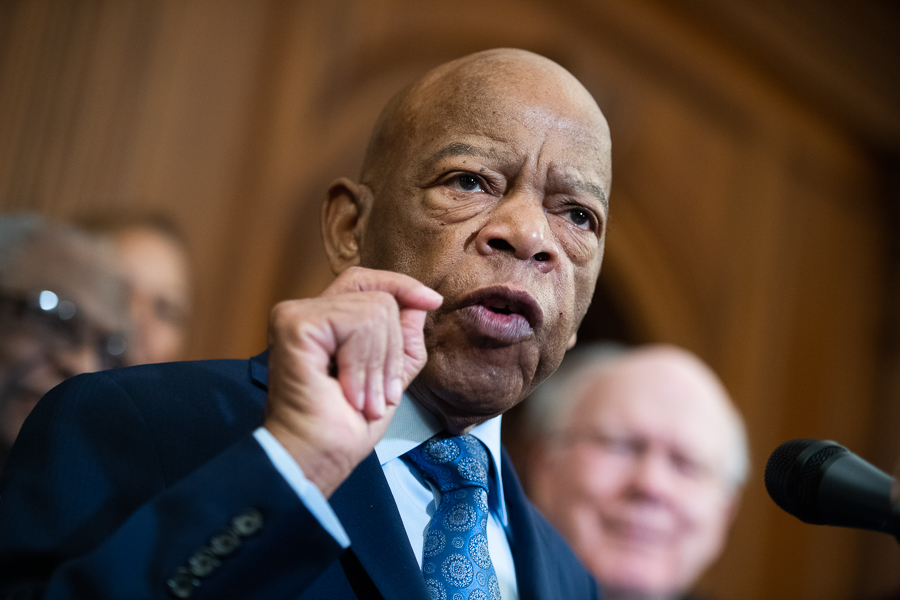 Rep. John Lewis, D-Ga., speaks during a news conference in the Capitol on the Voting Rights Advancement Act on Friday, December 6, 2019.